Hanwha shares jumped about 17% in August alone to 34,750 won ($ 29.8) on Tuesday at 12:11 p.m., supported by a net purchase of 25.5 billion won and 55.2 billion won, respectively. with foreigners and national institutions. The gain stood out as the other holding entities of the main conglomerates in Korea were weak.

The rally is driven by investors’ expectations regarding the restructuring of the group’s governance. H-Solution, the group’s software unit, announced on August 11 that it will be merged with Hanwha Energy on October 1 to improve management efficiency. H-Solution has a full stake in Hanwha Energy. 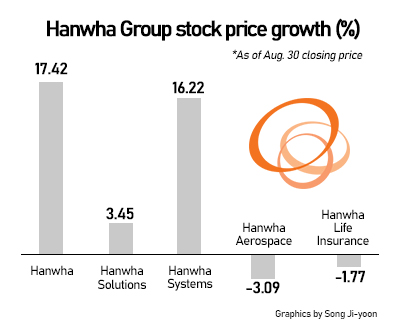 Market analysts find the merger a prelude to the succession of third-generation executives. H-Solution is the key company for its restructuring of ownership as it is 100% owned by three sons of Hanwha Group Chairman Kim Seung-youn, his first son Kim Dong-kwan owning 50% and the second and third sons Dong -won and Dong- seon 25 percent each.

The chairman is Hanwha’s largest shareholder with 22.7% while his three sons hold less than 8% combined in the holding entity. A merger between Hanwha Energy and Hanwha could follow after the integration of Hanwha Energy and H-Solution.

The income statement was also looking.

Seoul-based market research FnGuide estimates Hanwha’s operating profit for this year to increase 47.5% from last year to 2.33 trillion won and sales by 3.8% to 52.88 trillion won. Market analysts present its target stock price at 42,125 won on average.

By Kang Bong-jin and Choi Mira